Much of my work has been nonfiction — science, nature, travel writing and personal essays — but I have translated more than a dozen novels from the French, and have published two novels of my own. Emancipation Day was long-listed for the Scotiabank Giller Prize, won the Amazon.ca First Novel Award, and was named a CBC Best Book of 2013 and a National Post Best Book of the Year. Up From Freedom, which came out in 2018 and takes place in mid-nineteenth-century America, was called “a powerful, deeply layered story” that “resonates with a contemporary world in which prejudice and violence never seem far away.”

With my wife, novelist Merilyn Simonds, I co-authored Breakfast at the Exit Café: Travels Through America after our three-month drive across the U.S. in a Toyota Echo. With David Suzuki, I co-wrote the international bestseller Tree: A Life Story.

My work has been shortlisted for the Governor General’s Award four times, and I won it for my translation of Antonine Maillet’s On the Eighth Day. My translation of Louis Hamelin’s October 1970 was long-listed for the Scotiabank Giller Prize, and my most recent translation is The Accidental Education of Jerome Lupien, by Yves Beauchemin. I’ve also received four Science in Society Awards and won or been shortlisted for thirteen National Magazine Awards. My book The World of the Coyote was named Best Book of the Year for Young Readers by the New York Public Library, and The Great Lakes, won the 2010 National Outdoor Book Award.

I teach creative nonfiction in the MFA program at the University of British Columbia. Merilyn and I divide our time between Kingston, Ontario, and San Miguel de Allende, Mexico. 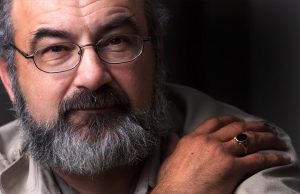 I was born in Windsor, Ontario, in 1948, and graduated with a First-Class Honours BA in English Literature from Carleton University in 1971, whereupon I moved to Montreal and began writing book reviews for the Montreal Gazette. Since then, my writing has appeared in such literary magazines as the Tamarack Review, Quarry, Event and Queen’s Quarterly, as well as in major magazines, including Weekend, Saturday Night, Toronto Life, Equinox, Harrowsmith, Natural History, Omni, Canadian Geographic, Smithsonian, Explore, The Walrus, and The United Church Observer. I was an editor of Harrowsmith from 1984 to 1990, and was Science Editor, and later Editor, of Equinox magazine. For three years I wrote a natural-history column for Explore; the columns were later revised into essays and published as Bringing Back the Dodo.

I have also written fourteen books of nonfiction, translated fifteen novels from the French, and have edited eleven anthologies of literary fiction and nonfiction. I won the Governor General’s Award for Translation in 1989 for Antonine Maillet’s On the Eighth Day, was nominated for a GG in 1995 for Daniel Poliquin’s Black Squirrel, and again in 2005 for Françine d’Amour’s Return from Africa. My most recent translation is Yves Beauchemin’s novel, The Accidental Education of Jerome Lupien, published by House of Anansi in 2018.

In 1980, I edited the first Penguin Book of Canadian Short Stories, followed by the Penguin Book of Modern Canadian Short Stories. In 1986, Matt Cohen and I co-edited Intimate Strangers: Short Stories from Quebec. The Windsor Star called my travel anthology, From the Country, “one of the finest anthologies to come out in this country in many years.” And I was series editor of Greystone Books’ Literary Companions, which included anthologies of nature writing on such topics as Mountains, Rivers, the Sea, Deserts, Gardens, and the Night.

In 1990, I travelled to the Gobi Desert with a team of Canadian and Chinese paleontologists to hunt for dinosaurs: my account of that expedition, The Dinosaur Project, was called “a fascinating tale of adventure…a compelling travelogue, and an intriguing look at cultural conflict.” The book has been translated into Chinese, Japanese and Polish.

In 1994, I took part in a second scientific expedition, this time to the North Pole aboard the Canadian Coast Guard icebreaker Louis St. Laurent, in search of early evidence of global warming: The Quiet Limit of the World, a blend of travel and science writing, was about that voyage. One of the first books on climate change, it won the 1997 Science in Society Award and was shortlisted for the Governor General’s Award for Nonfiction. At the time, not everyone was convinced that global warming was a scientific reality.

For my third book of science and travel, The Bone Museum, I travelled to Patagonia with Phil  Currie and a team of Canadian paleontologists from the Tyrrell Museum to investigate the connection between dinosaurs and birds. Smithsonian Magazine noted that the book “is full of unanswerable questions which, along with page-turning reportage and insightful speculation, give it wings.” At the time, not everyone was convinced that birds are descended from dinosaurs.

Tree: A Life Story, which I co-authored with David Suzuki, has been published in Canada, the United States, Australia, Germany and South Korea, became a national bestseller in Canada, was short-listed for the BC Book Award for Book of the Year, and earned Grady his fourth Science in Society Award. A new edition, updated and with a foreword by Peter Wolleben, came out in 2018.

The Great Lakes: The Natural History of a Changing Region, about the natural wonders and unnatural threats to the largest fresh-water system in the world, won the National Outdoor Book Award in the United States. At the time, not everyone was convinced that the Great Lakes were endangered by pollution, global warming and invasive species. As the Globe & Mail  remarked, “threats to the Lakes’ integrity are increasingly met with resistance. If the written work is still meaningful in advancing this crucial resistance, this challenging book should be sent into battle immediately, and given a place on the front lines.”

Technology, a history of technology from 5000 BCE until today, was reviewed in the Guelph Mercury as “a short and poignant book by an exceptionally knowledgeable writer.” This reminded me of what Matt Cohen said about my earlier book, Chasing the Chinook, about Canadian words and phrases: “If Wayne Grady’s mind ever has a garage sale, it’s going to need a lot of sidewalk.”

Breakfast at the Exit Cafe, which my wife, novelist and creative nonfiction writer Merilyn Simonds wrote together in alternating chapters, is a travel memoir of a two-month road trip we took across the United States. It examines America in light of the myths that Canadians have grown with about that country, and the myths Americans tell about themselves. The Globe & Mail called it “a seamless travel collage [that] flows as easily as a new car on an empty highway.”

My first novel, Emancipation Day, was long-listed for the Scotiabank Giller Award, was a finalist for the CBA Libris Award, named a CBC Best Book of 2013, and a National Post Best Book of the Year, was chosen as a Chatelaine Book Club Pick, an Indigo Heather’s Pick, and won the Amazon.ca First Novel Award.

And my second novel, Up From Freedom, was published in 2018 to much critical acclaim. A starred review in Booklist noted that “in the tradition of Toni Morrison and Colson Whitehead, Grady brings home the truth that there are no simplistic ways to combat and overcome deep-rooted hate and fear.” CBC Books called it “a powerful and emotional novel about the dangers that arise when we stay silent in the face of prejudice or are complicit in its development.”

I have been on the Board of Directors of the National Magazine Award Foundation, the Ottawa Writers’ Festival, and am still on the boards of Queen’s Quarterly magazine and the Pelee Island Bird Observatory. I served on the Advisory Committee for the Canada Council, helped set up the Trillium Award, and was on the steering committee of the National Reading Campaign. I am a member of PEN Canada and the Writers’ Union of Canada, of which I was Chair in 2009-10. And for eighteen years I have served , with Patsy Aldana, Graeme Gibson and Don Orevic, on the jury for the annual Matt Cohen Award, administered by the Writers’ Trust of Canada.

I also teach creative nonfiction in the optional-residency MFA program at the University of British Columbia, and have delivered papers at international colloquia in Canada (on the Arctic and the Great Lakes), Norway (on translation), Kansas (on race and racism) and Mexico (on creative nonfiction). I’ve conducted writing workshops in Montreal, Kingston, Vancouver, Saskatchewan, and Banff, and was Writer-in-Residence at the Whitehorse Public Library in 2001, in Whistler, BC, in 2008 (with Merilyn), and in Campbell River, BC, in 2016.

Merilyn and I divide our time between Kingston, Ontario, and San Miguel de Allende, Mexico.

“The Good Father is a book of real wisdom and profound heart.”
—Timothy Taylor